Caitlyn Jenner, who won a gold medal in the 1976 Olympics as a biological male named Bruce, has filed paperwork to run as a Republican to replace Democrat California Governor Gavin Newsom.

“I’m in! California is worth fighting for. Visit http://CaitlynJenner.com to follow or donate today. #RecallNewsom”

“Our campaign will be powered by everyday Californians who deserve leadership that is accountable to them, not the special interests in Sacramento,” Jenner said in a follow-up post.

“Small businesses have been devastated because of the over-restrictive lockdown. An entire generation of children have lost a year of education and have been prevented from going back to school, participating in activities or socializing with friends. Taxes are too high, killing jobs, hurting families, and putting an especially heavy burden on our most vulnerable people.”

Jenner, who had been considering a run in the event of the now-likely vote to recall Democrat Gov. Gavin Newsom, has hired a campaign staff and filed the necessary paperwork, Fox News reports:

“Jenner, the Olympic gold medal winning decathlete turned transgender rights activist and nationally known TV personality, had been mulling a bid. Word of the decision was first reported by Axios and confirmed by Fox News.

“Jenner has put together a team of prominent Republican operatives to advise the campaign, including 2016 and 2020 Trump presidential campaign pollster Tony Fabrizio and Steven Cheung, a Trump White House and reelection campaign aide who worked on Arnold Schwarzenegger's successful 2003 gubernatorial recall election victory.”

Bruce Jenner rose to fame when he won the decathlon gold medal for the U.S. in the 1976 Olympics. In 1991, he married celebrity Kris Kardashian. In 2014, he divorced Kardashian and, a year later, announced that he would, henceforth, identify as a woman named Caitlyn. 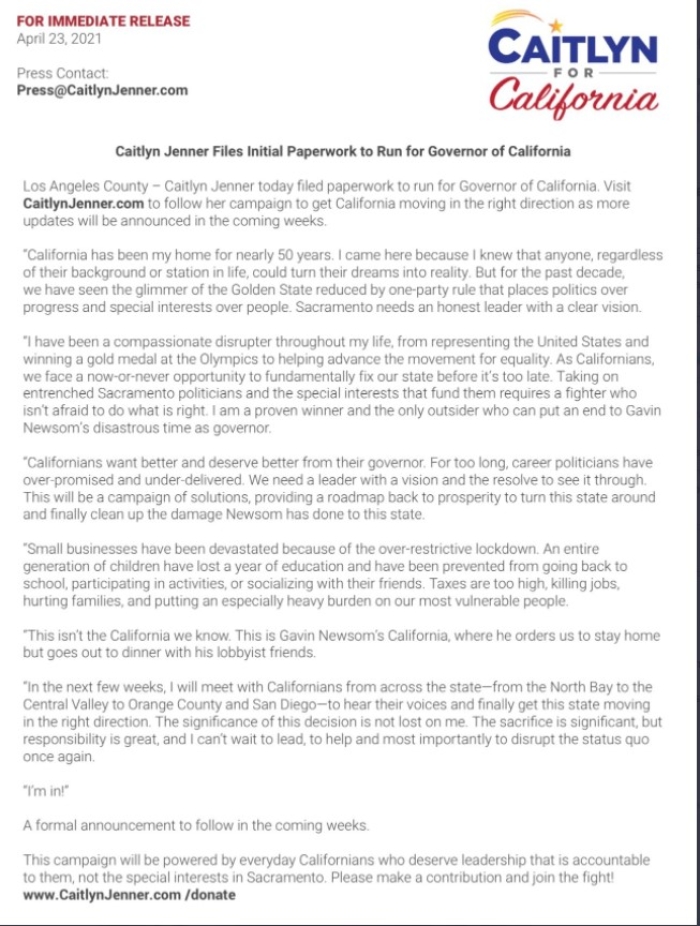