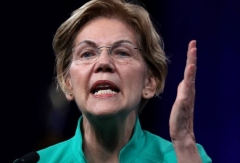 At the U.S. Capitol last week, CNS News caught up with several senators and asked them the following question:

“President Biden has presented Congress with a budget that proposes running $14.5 trillion in deficits over the next decade. Will Congress ever balance the budget?”

Generally, Republicans said that the U.S. definitely should balance its budget, but they were less certain about when that might happen.

Democrats – such as Senators Dianne Feinstein, Elizabeth Warren and Mark Kelly – said it would take more tax revenue to balance the budget. Others tended to be more skeptical, with some saying the budget will never be balanced and others saying that, if it ever is, it won’t be balanced any time soon.

Here’s how each of them responded (click on links to read full story).

'We Should Be Balancing the Budget Right Now' – Sen. Ted Cruz (R-Texas)

'Balance the Budget and Quit Wasting All This Money' – Sen. Rick Scott (R-Fla.)

'Very Hard to Do It, But I Think It's Feasible' – Sen. Roger Marshall (R-Kansas)

Congress Won't Make 'the Hard Choices That Need to be Made' to Balance the Budget – Sen. James Langford (R-Okla.)

‘The Budget Is Balanced In It's Going to be Paid For, Taxpayers Will End Up Paying For It, Is the End Result’ – Sen. Dianne Feinstein (D-Calif.)

We Can Change Tax Laws and Raise $6 Trillion Without Breaking a Sweat – Sen. Elizabeth Warren (D-Mass.)

Biden’s Deficit-Laden Budget: ‘There Are Ways We Can Pay for This’ – Sen. Mark Kelly (D-Ariz.)

'Balancing the Budget is Not Realistic' – Sen. Dick Durbin (D-IL)

‘Neither Political Party Has Any Credibility on This Issue’ – Sen. Mark Warner (D-Va.)

With Spending by Trump, GOP, We Won't Balance the Budget 'Anytime in the Near Future' – Sen. Chris Murphy (D-Conn.)

‘Very Hard to Predict’ When Budget Will Be Balanced – Sen. Ben Cardin (D-Md.)

We've Only Balanced the Budget Under a Democratic President – Sen. Patrick Leahy (D-Vt.)