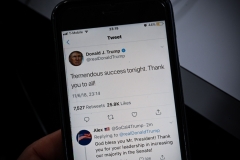 Twitter has begun posting rebuttals to tweets by President Donald Trump under the direction of a “Head of Site Integrity” who has, himself, used the social media giant to call Trump officials “actual Nazis” and “Joseph Goebbels,” in a move one columnist deems “a shocking step.”

Has Twitter finally crossed the line? The social media giant sparked Republican fury on May 26 by attaching a fact-check label to two of President Trump’s tweets on mail-in voting.

“Get the facts about mail-in ballots,” bright blue tags, each accompanied by a prominent exclamation point, cried out below the Trump tweets. In what can only be accurately described as an attempt to present a rebuttal of the president on a political issue, Twitter sought to direct an audience to sources contesting Trump’s claim that postal voting is rife with fraud. A Twitter spokesperson said Trump’s tweets “contain potentially misleading information about voting processes and have been labeled to provide additional context around mail-in ballots.”

While Twitter didn’t flat-out declare Trump’s comments false, it flagged them for being “unsubstantiated” and promoted rebuttals from anti-Trump liberal media like CNN and The Washington Post, Schaeffer notes:

Scrolling down the thread, one finds highlighted quotes from several dominant media outlets that have long displayed open hostility to Trump, slamming him for pushing “false claims” (NBC News) and stating that “there’s just no significant evidence of intentional voter fraud on anything near the scale Trump and his allies allege” (CNN).

What’s more, the person responsible for developing and enforcing Twitter’s rules – its “Head of Site Integrity,” Yoel Roth – has actually wielded Twitter to post vicious, name-calling attacks on Trump, his officials and his supporters, Schaeffer reports:

“Roth has a history of making virulently anti-Trump statements, such as calling Trump administration officials “actual Nazis.” Jon Levine of the New York Post featured screenshots of several anti-Trump tweets posted by Roth on his account. “I’m just saying, we fly over those states that voted for a racist tangerine for a reason,” Roth tweeted on Nov. 8, 2016. “‘Today on Meet the Press, we’re speaking with Joseph Goebbels about the first 100 days’ – What I hear whenever [Trump adviser] Kellyanne [Conway] is on a news show,” he tweeted on Jan. 22, 2017.”