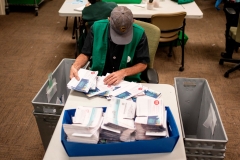 Nearly three-fourths of U.S. states have some form of voter identification requirement that would be abolished, if Democrats’ “For the People Act” (H.R. 1) bill becomes law, a new study by the Honest Elections Project (HEP) warns.

H.R. 1 would negate a range of state laws designed to ensure that only legal votes are counted and that political operatives don’t harass voters trying to cast their ballots, “H.R. 1’s Impacts on Election Safeguards and Voting Practices” explains:

H.R. 1 would even eliminate election integrity laws currently in force in a number of “blue” states (those with Democratic governors or legislatures):

Within months of enactment, H.R. 1 would require many states to implement drastic changes to their election systems and infrastructure, such as:

In conclusion, the report warns that H.R. 1 would “permanently reshape elections in ways that weaken voting safeguards, put public trust in elections at risk, and ignore the desires of mainstream voters.”