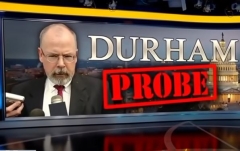 In a court filing Monday night, Special Counsel John Durham presents an alleged text message from Hillary Clinton campaign lawyer Michael Sussmann falsely telling the FBI that he was not working on behalf of any client when he delivered anti-Trump research in 2016, Just The News reported on Tuesday.

According to the article, prosecutors say the text message is evidence that Sussmann lied to the FBI when he offered to provide now-discredited anti-Trump “Russia Collusion” research:

“The existence of the text message between Sussmann and then-FBI General Counsel James Baker was revealed in a court filing late Monday night by Durham's team. Prosecutors said they intend to show Sussmann gave a false story to the FBI but then told the truth about working on behalf of the Clinton campaign when he later testified to Congress.”

"I'm coming on my own – not on behalf of a client or company – want to help the Bureau. Thanks," Sussman texted Baker, according to a copy of the court document posted by Just The News.