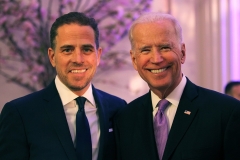 Days before the 2020 presidential election, 51 former national intelligence officials signed a letter discrediting the now-verified Hunter Biden laptop scandal, creating a narrative that appears to have swayed the election in favor of then-candidate Joe Biden.

Five days after The New York Post broke the news of scandalous information contained in a laptop owned by candidate Biden’s son, Hunter, the 51 intel experts released their statement, reported by Politico under the following headline:

“If we are right, this is Russia trying to influence how Americans vote in this election, and we believe strongly that Americans need to be aware of this,” the letter says, highlighting its assertion in italics.

However, the statement was released after the current Director of National Intelligence John Ratcliffe stated unequivocally that the intelligence community (IC) does not believe the emails, allegedly obtained from a laptop belonging to Hunter Biden, were “part of some Russian disinformation campaign.”

Last week, The New York Times, at long last, confirmed that the laptop did, indeed, belong to Hunter Biden.

The New York Post, then, asked the 51 former intelligence officials if they would like to apologize for, or comment on, the revelation that The Post’s story was factual, not Russian disinformation, as they had suspected.

Not one of the 51 either apologized or admitted having been wrong. Most simply refused to reply, but former director of national intelligence turned CNN pundit Jim Clapper said he thought the statement was appropriate “AT THE TIME”:

“Yes, I stand by the statement made AT THE TIME, and would call attention to its 5th paragraph. I think sounding such a cautionary note AT THE TIME was appropriate.”

In the fifth paragraph cited by Clapper, the letter declares that the signees are “deeply suspicious that the Russian government played a significant role” in The Post’s report:

“We want to emphasize that we do not know if the emails, provided to the New York Post by President Trump’s personal attorney Rudy Giuliani, are genuine or not and that we do not have evidence of Russian involvement -- just that our experience makes us deeply suspicious that the Russian government played a significant role in this case.”

A post-election poll from the Media Research Center (MRC), conducted by McLaughlin & Associates in November of 2020, reveals that 36% of Biden voters were not aware of the evidence linking Joe Biden to corrupt financial dealings with China through his son Hunter. Thirteen percent of these voters (or 4.6% of Biden’s total vote) say that – had they known these facts – they would not have voted for the former Vice President.

Such a shift away from Biden would have meant President Trump would have won the election with 289 electoral votes, MRC’s NewsBusters division explained in an article presenting the survey results.

An MRC survey conducted by The Polling Company found that even more Biden voters (45.1%) said they were unaware of the financial scandal enveloping Biden and his son, Hunter (a story infamously censored by Twitter and Facebook, as well as ignored by the liberal media). According to the poll, full awareness of the Hunter Biden scandal would have led 9.4% of Biden voters to abandon the Democratic candidate, flipping all six of the swing states he won to Trump, giving the President 311 electoral votes.