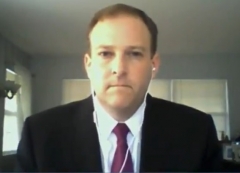 “The city won’t make it through the rest of his term,” New York Rep. Lee Zeldin (R) predicted Wednesday, commenting on New York City’s surge in shootings over the weekend and recent spike in violence and crime under the watch of Democrat Mayor Bill de Blasio.

“The radical left is in charge & destroying the city,” Zeldin said in a Twitter post issuing the dire warning and calling for the mayor’s removal from office before it’s too late:

“Homicides, shootings & other crimes continue spiking in NYC. Quality of life is taking a beating, cops are being thrown under the bus, & the radical left is in charge & destroying the city. DeBlasio must be removed immediately. The city won’t make it through the rest of his term.”

The city’s residents are more in danger of being shot than they are of dying from the coronavirus – so, maybe, the city should be giving residents bullet-proof vests instead of preaching to them about wearing masks, Rep. Zeldin suggested in another Twitter post on Wednesday:

“NYC residents right now have a greater chance of getting shot than dying from COVID-19. Just look at the numbers from the past week. For all the talk about masks, maybe we should also be passing out vests. New leadership is needed to save NYC and restore safety and security.”

Rep. Zeldin repeated his warning in an interview with Newsmax TV, in which he called for New Yorkers to have more respect for both police and the rule of law:

“As far as Mayor de Blasio goes, he needs to be removed. The city is not going to survive the remainder of his term that’s left.”

“I want to see our police supported more, not less. I want to see a return to respecting law and order, the rule of law.”