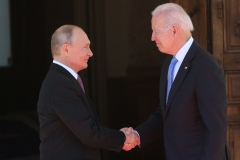 “I don’t think it was positive for the United States of America and NATO nations.

“When he says there was ‘no hostilities’ – maybe, there should have been hostilities, when you consider we’ve just been hacked by Russia.”

“They’re going to present this list of targets that are, quote, ‘off limits.’ Well, that’s the not same as what used to be U.S. nuclear policy. We used to have what they called the ladder of escalation. It was a bunch of if/then statements. If Russia does this, then the U.S. will respond in this way. If this, then that.

“It wasn’t that. It was, ‘Here’s this list of really vulnerable things. Please don’t hit those, because that will really hurt.’ That isn’t U.S. strength.”

Biden told reporters Wednesday that he had given Putin a list of 16 types of vulnerable U.S. infrastructure that he hopes will be “off limits to attack”:

“Another area we spent a great deal of time on was cyber and cybersecurity.  I talked about the proposition that certain critical infrastructure should be off limits to attack — period — by cyber or any other means.  I gave them a list, if I’m not mistaken — I don’t have it in front of me — 16 specific entities; 16 defined as critical infrastructure under U.S. policy, from the energy sector to our water systems.”

“I would take this away as something to be thankful for: at least he didn’t show up with a ‘reset button’ like Hillary Clinton,” Rep. Mast said.