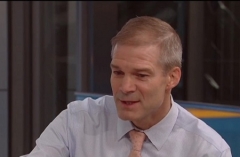 “The facts aren’t on their side, the Constitution’s not on their side, and there’s been no due process for the president of the United States,” Rep. Jordan said in an interview on Fox News Channel, discussing Democrats’ "incitement of insurrection" charge predicated on a speech Trump gave at a D.C. rally last month.

According to the Constitution, impeachment is a method of removing a president from office – but, Trump has already left office – Jordan told Host Shannon Bream.

“They’re doing it because it’s an obsession with them. Remember, they tried to remove Pres. Trump from office before he got there. Now, they’re trying to remove him after he’s already left,” the congressman added.

Trump was also denied due process in his impeachment by the Democrat-controlled House, something Democrats did grant Trump during his first impeachment, Jordan explained:

“There was no subpoenas, no depositions, no witnesses, no hearings, no cross-examination.

“The last impeachment, even though they did it in the bunker in the basement of the Capitol, at least we had depositions and witnesses and hearings for that process.”

Finally, Rep. Jordan said that both the timing and content of Trump’s speech belie Democrats’ claim: