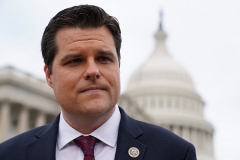 In both his video and his ethics complaint, Rep. Gaetz cites Schiff’s false account of President Donald Trump’s conversation with the president of Ukraine and Schiff’s breach of House rules regarding expulsion of a non-participatory House member from Schiff’s Intel Committee impeachment hearing:

I just filed an ethics complaint against @RepAdamSchiff over his handling of the impeachment inquiry into President Trump.

Schiff has lied to the American people and abused his power.

We won't allow him to continue trampling the Constitution. pic.twitter.com/TA8ONY2OtN

“Nancy Pelosi’s impeachment resolution give unprecedented to the Intelligence Committee Chairman Adam Schiff. That’s deeply troubling to me for a few reasons.

“First, Adam Schiff has proven in this process that he cannot adhere to the fundamental principles of fairness. And, second – and I would say most important for my work today – is that Adam Schiff has violated the ethical rules of the House of Representatives.

“Rule 23, Clause One and Two, of the code of conduct for members of the House of Representatives requires that we engage in conduct that brings credibility on the House and that we don’t impair the credibility of the House.

“And so, now – on the eve of a vote that will give unprecedented power to someone who does not deserve it – today, I’m going to go file an ethics complaint against Adam Schiff for violating Rule 23 of the House.

“Adam Schiff has also violated Rule 11 of the House. Rule 11 requires that, if you are going to expel a member of Congress from a hearing, who does not intend to participate by asking questions, that you are required to hold a vote on that measure. Adam Schiff held no such vote when he expelled me, multiple times, from simply being able to observe what the heck was going on.

And, so, right now, I’m going to go to the Ethics Committee and I’m going to file an ethics complaint against Adam Schiff – because, if House Democrats tomorrow are going to give this man an unprecedented amount of power in this process, they’re going to know exactly how he has departed from the rules of the House and how he has fallen short of the ethical standards that should apply to this institution.”

#BREAKING: Today I filed an ethics complaint against @RepAdamSchiff for:

-Lying to the public about "Russian collusion”

Schiff must be held accountable. pic.twitter.com/oUIGWx2Lns