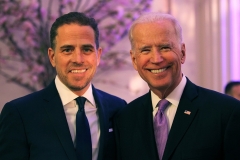 The more closely voters follow the news of Hunter Biden’s overseas business dealings, the more likely they are to think that it’s “very likely” that media refused to cover the story in order to help Joe Biden’s presidential bid, a new Rasmussen survey finds.

“Among those who have been following Very Closely, 76% say the media deliberately ignored the story before Election Day to help Joe Biden,” Rasmussen reports, announcing the results of its national survey of likely voters, conducted December 13-14, 2020.

“Now that Hunter Biden has acknowledged he is under investigation for tax evasion, many news organizations are starting to take a first look at his overseas business dealings which were first reported several weeks prior to Election Day,” Rasmussen told those surveyed, posing the following question:

“Which is closer to your thinking - that many news organizations ignored the Hunter Biden story to help Joe Biden's presidential campaign or that many ignored the story because they felt it was a partisan hit job?”

On Wednesday, Sen. Ron Johnson (R-Wis.), chair of the Homeland Security Committee, called the media's refusal to cover the story until after the election a "galling" example of media suppression affecting the outcome of an election:

"Senator Grassley’s and my investigation and report on the conflicts of interest and foreign financial entanglements of the Biden family is just one example of how media suppression can, and does, affect the outcome of an election.

"It is both amazing, and galling, that all of a sudden — post-election — this has become a news story and a scandal worthy of investigation."

The Rasmussen survey also finds that, the more closely respondents follow the news, the more likely they are to say that it’s very likely that “Joe Biden was consulted about and perhaps profited from his son Hunter's overseas business deals.”

In all, a majority (52%) of all respondents believe the media ignored the Hunter Biden story in order to help his father’s campaign. Another 32% say the media didn’t cover the story because journalists viewed it as “a partisan hit job,” while 17% are unsure.