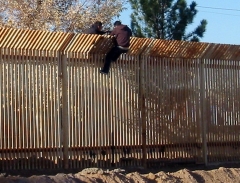 Strong majorities of Republicans (85%) and voters not affiliated with either major party (67%) say the current situation with migrants at the U.S.-Mexico border constitutes a crisis, but only 49% of Democrats agree.

Belief that there’s a border crisis rises as approval of President Joe Biden declines. Just 33% of voters who “strongly approve” of Biden say there’s a crisis, compared to majorities of those who “somewhat approve” (54%), “somewhat disapprove” (79%) and “strongly disapprove” (95%) of the president.

Asked whether “the nation’s current immigration problems” are due to the policies of either Biden or former President Donald Trump, voters are more likely to blame Biden (50%) than Trump (41%), while 9% aren’t sure who’s to blame.

While young, Democrat, Black and graduate school respondents are more likely to blame Trump than Biden, a plurality of voters in all income categories say Biden’s policies are more at fault for the nation’s immigration woes.