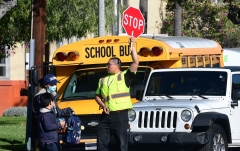 More than twice as many U.S. adults disagree, rather than agree, with former President Barack Obama’s claim that Virginia parents’ concerns about transgenderism and Critical Race Theory in their public schools are “phony, trumped-up culture wars” and “fake outrage.”

Obama made the controversial comment on Saturday during a rally for Virginia Democratic gubernatorial candidate Terry McAuliffe, irking conservatives for his apparent dismissal of parental concerns about schools.

"We don't have time to be wasting on these phony, trumped-up culture wars," Obama said at Virginia Commonwealth University before targeting Republican nominee Glenn Youngkin.

However, a national Rasmussen survey of 1,000 American adults conducted in the two days following Obama’s claim shows that a strong majority disagree with the former president.

“Should parents be concerned about transgenderism and Critical Race Theory in public schools, or are these basically phony issues?” Rasmussen asked.

Only about a quarter of whites (28%), blacks (23%) and other minorities (25%) believe parental concerns about transgenderism and CRT in public schools are phony issues.

Among adults who have either children or grandchildren attending public school, 61% voiced concern, compared to 24% who said the issues are phony. Even those without kids in school were nearly twice as likely to say the issues are cause for concern (55%), rather than phony 28%.

In a separate question, Rasmussen asked: “How concerned are you that public schools may be promoting controversial beliefs and attitudes?”

While 76% of American adults said they’re concerned that public schools may be promoting controversial beliefs and attitudes, including 58% who say they are “very concerned,” only 21% said they were not concerned. Majorities across both the political and racial spectrum voiced concern about the controversial teaching of the nation’s public schools.