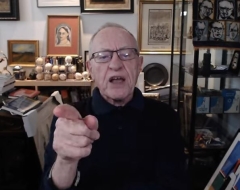 While the FBI claims it was searching for only classified documents, Dershowitz and Fox News Channel Host Sean Hannity examined how the FBI's failure to follow standard procedure and double standard of prosecuting only conservatives suggests otherwise.

“The key point that everybody is missing here is that Donald Trump was not in Mar-a-Lago, so there was no reason not to issue a subpoena,” instead of using a search warrant, Dershowitz told Hannity:

“Well, definitely, there is a double standard. We've seen so many instances of allegedly classified material being compromised.

“The key point that everybody is missing here is that Donald Trump was not in Mar-a-Lago, so there was no reason not to issue a subpoena, returnable tomorrow.

What’s more, the agents had no right to open Trump’s safe, as they did, without a special warrant that goes above and beyond a normal search warrant, Dershowitz noted:

“Not only that, but under the law, if you seize a safe, you don't go into the safe - you have to get a special warrant to get into the safe, and you have to prove that the material in the locked safe would have been destroyed.”

“They darn well better have smoking-gun proof,” the Constitution scholar and law professor said. And, since it’s unlikely they do, the FBI has violated Justice Department rules, Dershowitz declared:

“So it seems to me that they have violated the rules of the Justice Department, they have gone after both a former president and a future candidate - and they darn well better have smoking-gun proof - which I don't see happening.”

The FBI’s behavior is not redolent of that of a democratic rule-of-law country, especially since there’s no evidence that Trump committed “a serious, serious crime,” Dershowitz said:

“And, clearly, there's been a double standard here. But, even if it was a single standard, it's not good enough!

“You don't get a warrant, unless a subpoena won't suffice. In a democratic rule-of-law country, you do it legitimately: you go to the lawyer, you say, ‘By tomorrow I want that safe delivered to the Justice Department. I want these documents turned over.’

“That's Nixon - and there's no evidence that that happened here.”

“I don't think you use search warrants and prosecutions to go after political enemies,” so the Biden Administration is acting like the government of a third-world Banana Republic, Dershowitz said.

“That’s not supposed to happen in the United States,” Dershowitz said, denouncing the Biden Administration’s unjustified prosecution of its opponents as “impermissible in a democracy”:

“I've just written a whole book on that, called ‘The Price of Principle,‘ where I go into the whole issue of why you don't use partisan considerations to go after political enemies. That's what happens in Banana Republics.

“That's what happens in third-world countries. That's not supposed to happen in the United States. It was right not to go after Hillary Clinton, because she was a candidate for president. You need a much higher standard, but you can't apply one standard to Hillary Clinton and another standard to Donald Trump. That is impermissible in a democracy.”