Friday morning: Biden refuses to take questions about anything except economy.
Blog

Poll: Media’s Coverage of Border Condemned by 66% of Voters Who Say There’s a Crisis 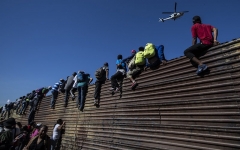 There’s an immigration crisis at the U.S.-Mexico and the media are doing a poor job of covering it, a majority of U.S. voters say, according to a new Rasmussen survey.

Fully 70% of U.S. likely voters say there is an immigration crisis at the U.S.-Mexico border, the national survey of 1,000 U.S. likely voters, conducted Sept. 19-20, 2021 finds. Twenty-one percent say the situation does not constitute a crisis, while 9% aren’t sure.

Among those who think a crisis exists, 66% say that the media is doing a poor job of covering the nation’s current immigration problems, compared to just 27% who don’t consider the situation a crisis.

The more displeased voters are with “the way President Biden is handling issues related to immigration,” the more likely they are to condemn the media’s coverage of the issue.

Overall, 52% of voters rate Biden’s handling of immigration as poor. Of those, 87% also think the media’s coverage is poor. Meanwhile, the media’s reporting is considered poor by less than one in three voters who think Biden’s doing either an excellent (4%), good (16%) or fair (30%) job on immigration.

Likewise, voters who blame Biden for the nation’s current immigration problems are much more prone to fault the media’s coverage than are those who say former President Donald Trump’s policies are to blame. Overall, 54% blame Biden and 37% blame Trump for today’s immigration woes.

Only 18% of those who think Trump’s to blame for the country’s immigration troubles say the media’s doing a poor job – compared to 80% of those who fault Biden.