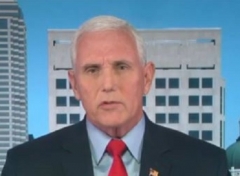 “I have met Vladimir Putin; I looked him right in the eye, and I can tell you: Putin only understands strength,” former Vice President Mike Pence said Friday, calling for “Less talk and more action” regarding Russia’s invasion of Ukraine.

“People are dying right now in Ukraine,” but the Biden Administration is just “nickel and diming our way forward,” when the U.S. should be taking immediate action, Pence said in an interview on the Fox News Channel:

“People are dying right now in Ukraine. I know President Zelensky. He is a good man. He is demonstrating his courage, staying in his capital and standing with his people.

“And, here you have the Biden administration nickel and diming our way forward, when we ought to put punitive sanctions in the immediate moment, not delay in any way, and we ought to be sanctioning the primary source of revenue for Russia: their energy and oil exports.

“You take that action now. Not only will you stop Putin's advance, but you keep those in place until the Russian military fully withdraws from Ukraine. Because I think it is extremely important to know: this is not just about Ukraine. This is about Putin and Russia's desire to redraw the lines of European countries by force. In my first year, we saw the most massive deployment of Russian forces along the border of eastern Europe.”

President Biden should immediately place sanctions on Russian energy, the lifeblood of the nation’s economy, and allow U.S. companies to quickly ramp up domestic energy production, because the only think Putin understands is a show of strength, Pence said:

“We need to sanction the oil exports for the Russians and, in the exact same moment, President Biden should authorize the Keystone XL pipeline and oil and gas leases in the United States of America. Those two things would send a deafening message of strength.

“I have met Vladimir Putin. I looked him right in the eye, and I can tell you: Putin only understands strength. Less talk and more action.

“We ought to put punitive sanctions on their economy, including oil exports and demonstrating our commitment to use America's vast energy resources. And, in the midst of all of that, not just prayers, but provide resources and material support and weapons to those extraordinary and courageous people of Ukraine that are fighting for their independence at this very hour.”