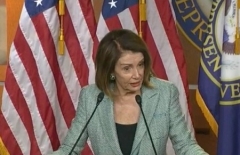 “Today’s job report is further evidence of the need to Build Back Better for our economy,” House Speaker Nancy Pelosi (D-Calif.) said Friday, reacting to August’s steep drop in job growth from its year-long trend reported by the U.S. Bureau of Labor Statistics (BLS).

As the BLS reported in its monthly Employment Situation Summary, August’s 235,000 job growth was less than half the average monthly job gain recorded so far this year, coming in at just  235,000. To-date in 2021, the U.S. economy has added an average of 586,000 per month:

“Total nonfarm payroll employment rose by 235,000 in August, and the unemployment rate declined by 0.2 percentage point to 5.2 percent, the U.S. Bureau of Labor Statistics reported today. So far this year, monthly job growth has averaged 586,000. In August, notable job gains occurred in professional and business services, transportation and warehousing, private education, manufacturing, and other services. Employment in retail trade declined over the month.”

“Today’s job report is further evidence of the need to Build Back Better for our economy,” Pelosi said in a statement commenting on the jobs report.

However, President Joe Biden’s Build Back Better spending plan isn’t just a short-term solution, it should continue for “years to come,” Pelosi said:

“The Build Back Better Act is what is needed to meet families’ needs, both during the pandemic and for years to come.”

It “will be transformational for families,” Pelosi predicted in her statement:

“Today’s job report is further evidence of the need to Build Back Better for our economy.  As the delta variant continues, decisive action is needed to ensure that the economic gains forged under President Biden – including four million jobs created – are sustained and shared by all.

“The Build Back Better Act is what is needed to meet families’ needs, both during the pandemic and for years to come.  We must Build Back Better so more women and parents can participate fully in our economy – including through historic investments in child care, paid family leave, free universal pre-school and home-based care.  The Build Back Better Act will be transformational for families: cutting costs for child care, health care and prescription drugs, education and other priorities for families, delivering one of the largest tax cuts ever for workers and families and creating millions of good-paying jobs.

“Congressional Democrats and President Biden will Build Back Better – with more jobs, cut taxes and lower costs for all.”

As CNSNews.com has reported, Pelosi is struggling to even gain support from some Democrats for her $3.5 trillion spending package, even though she is threatening to hold a Senate-passed infrastructure bill hostage until the House first passes her budget bill.