Pelosi Thought She 'Might Want to Be a Priest,' Because There’s 'More Power There' 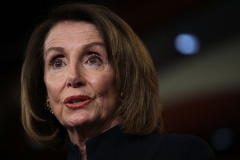 In a Jan. 24, 2003 interview with the National Catholic Reporter, then-Minority Leader Pelosi recalled the allure of being a priest:

"When I was little my mother always wanted me to be a nun. I didn't think I wanted to be a nun, but I thought I might want to be a priest because there seemed to be a little more power there, a little more discretion over what was going on in the parish."

Abortion was another issue where Rep. Pelosi disagreed with her Catholic mother:

"I come myself from a family that does not share my views on choice."

"I think there are occasions where they would like me to be less visible, that they don't like to see any disagreement between the church and any of us."

In a 2012 presentation at Texas A&M University, Rep. Pelosi explained how contentious her disagreement with her mother over abortion had become:

"We all say that abortion should be rare and safe and if necessary and the rest of that. So, why wouldn't we say that again, a woman's management of her situation probably would do a lot to prevent going to a place that's even more controversial in those terms."

"It's very sad and we all have to pray over it, and God - I'd say my mother, I won't even tell you the conversations that we've had on this subject, but, we have differing views."