Ocasio-Cortez: ‘The Last Time Our Generation - and I Personally - Witnessed a Thriving Economy was During the 90’s’ 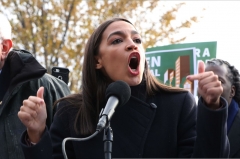 Despite the economic records set during the Trump Administration, Rep. Alexandria Ocasio-Cortez (D-N.Y.) says that her generation hasn’t witnessed a thriving economy since the 1990’s.

On Wednesday, Forbes posted video of Rep. Ocasio-Cortez making a pitch at a congressional hearing for her “Civilian Climate Corps” legislation, a bill introduced in April.

Ocasio-Cortez made the claim while touting the “generational dynamic” of her bill:

“But, specifically, from a generational dynamic, young people, the last time that our generation – and that I, personally – witnessed a thriving economy was during the 90’s, when we were kids.”

CLIMATE CORPS: Rep. @AOC speaks about why younger people should take charge of fighting climate change and why a Civilian Climate Corps is needed pic.twitter.com/VioOJR6et8

The congresswoman says the economy was then devastated by the “dot-com,” 9/11 and “a decade of war” – then skips to the “catastrophic recession” prompted by the coronavirus pandemic:

“It would be remiss, I think, if we didn’t mention the generational dynamic that this challenge represents. I think one thing that is really important, as well, is that in the Civilian Climate Corps. bill that Sen. Markey and I have introduced there is no age limit to participation. I think that this is incredibly important because it represents the economy, it’s reflected the economy that we are now growing up into.

“Especially during the pandemic, people have fallen out of unemployment into long-term unemployment, which does require these kind of interventions in order to get people ramped back into the economy again.

“But, specifically, from a generational dynamic, young people, the last time that our generation – and that I, personally – witnessed a thriving economy was during the 90’s, when we were kids.

“Then, the dot-com bust happened, 9/11 happened shortly after that. We were raised in a decade of war, in an impending climate crisis.

“And, then, from there, a catastrophic recession that most working people never fully recovered from.”

As CNSNews.com has reported, the economy under President Joe Biden’s predecessor, Donald Trump, recorded the lowest unemployment rate in fifty years, record-low unemployment rates for minorities and the highest total number of employed Americans on record.

Additionally, Trump’s economy set a record for highest quarterly growth rate in the third quarter of 2020, Fox Business reported at the time:

“The Commerce Department announced Thursday morning that the U.S. economy grew at an unprecedented 33.1% annualized pace in the third quarter.

“No matter how the Democrats and their media allies attempt to qualify it, that was the biggest GDP surge ever. It beat the previous historic high of 16.7% in the first quarter of 1950, as well as the third-quarter estimate of 32% from economists surveyed by Dow Jones.”

“Not only did the unemployment rate continue to fall, but the percentage of Americans aged 25 to 54 either employed or looking for a job saw its first sustained rise since the late 1980s. This inflection point changed the character of the labor market.”