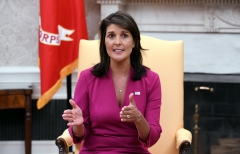 “It’s not about coming up with a new solution - we had the solution,” and President Joe Biden’s endangering American lives by refusing to employ it, Former Trump Administration U.S. Ambassador Nikki Haley says.

Former President Trump used “tough love with our friends” in Central America to gain their support and successfully secure the border, Haley told Fox News in an April 7 interview:

“It’s not about coming up with a new solution - we had the solution. The Trump Administration had these same migrant problems, but they fixed it. And, what they did was they used tough love with our friends.

“You know, Guatemala and Honduras are friends of America. They are not anti-American. These kids, and so many of these migrants, are coming from Central America. And, what the president did was he gave them tough love.”

“He said, ‘This is what we expect of you. We will partner with you, but you’ve got to control the situation in your country.’ If they want asylum, they have to apply from there. From there, he worked through Mexico, which is where they were coming from, to ensure that we had a handle on it.”

Tragically, Pres. Biden is more concerned with undoing anything accomplished by Pres. Trump than he is with saving lives, Haley said:

“It’s really unacceptable that Biden is so obsessed with Trump reversal that he’ll, literally, put the American public and these kids at risk the way he is.”