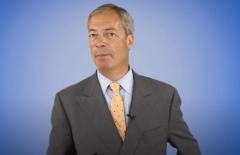 By turning his back on a post-Brexit trade deal with the UK, President Joe Biden is putting his globalist dogma ahead of the interests of American and British businesses and consumers, former Brexit Party Leader Nigel Farage said Wednesday.

In a Fox & Friends First interview, Farage, who led the U.K.’s exit from the European Union (EU), said that Biden is favoring the “globalist Brussels elite in the European Union” over the single biggest investor in the U.S.

If Brexit had gone more smoothly, the UK would have signed a trade deal with the U.S. during the Trump Administration, but Biden’s election has put any such deal at risk, Farage said:

“This is a point, maybe, your viewers don't know: the United Kingdom is still the biggest foreign investor in the United States of America and the United States of America is still the biggest single investor in the UK. We have close ties, not just of language, not just of culture, whether it’s art or music or film or ‘The Crown’ taking lots of awards, which we are very pleased about, by the way.

“But, we have the most incredibly close business connections and yet the trade deal that the Trump regime wanted to do with us for four years, which we didn't do because, I’m afraid, the government made rather a mess of Brexit, we didn't clear that hurdle until the second or third
attempt.

Biden’s public remarks show that he’s committed to his globalist dogma, not to the welfare of businesses and consumers, Farage said:

“And, I would put it to you that he’s putting political dogma ahead of the interests of both American and British businesses and consumers. And that, I think, is what really stood out in that slightly shambolic and bizarre press conference is President Biden is not putting the interests of American business first – rather, he is pursuing his own, outdated globalist dogma.”