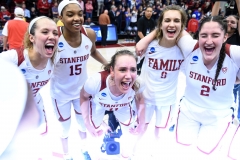 After threatening to shun states that require college athletes on female sports teams to be biological females, the NCAA has chosen three states with such laws to host tournaments.

Last month, the NCAA warned it could pull events from states that restrict transgender athletes from choosing whether they want to compete against males or females. But now, it says that Alabama, Arkansas and Tennessee will all continue to host tournaments, Breitbart.com reports:

“Over the weekend, the NCAA named Alabama, Arkansas, and Tennessee host schools for softball regionals. It has also been confirmed that Oklahoma City, Oklahoma, will host the Women’s College World Series once again. Though, all these states now have laws that put limits on transgender athletes, banning players born as males from playing in girls’ sports regardless of their claimed transition status.”

Concerned Women for America (CWA) cheered the news, calling it “a win for female athletes” who won’t be forced to compete against biological males:

“Just one month ago, the NCAA threw female athletes under the bus and sided with transgender athletes, claiming it would prohibit states with restrictions on trans athletes from hosting their future events. Amid mounting pressure from conservative groups, including CWA, the NCAA has caved and will allow tournaments to be held in states with laws protecting women in sports.

“This is a win for Americans finally standing up to woke corporations and a win for female athletes.”

“States are passing laws because Joe Biden is repealing Title IX and erasing women’s sports. It’s about time that the NCAA back off its woke agenda and stand up for female athletes. There is much more the NCAA needs to do to regain its sorry track record in women’s sports. Let’s see if they are really serious about getting out of the starting blocks.”

As Breitbart notes, the NCAA didn’t reverse course in the past, when it demanded North Carolina allow men to use women’s restrooms:

“The NCAA did follow through with similar threats back in 2017 when North Carolina passed a bill barring men claiming to be transgender women from using public restrooms designated for women. The state eventually repealed the law.”