There can be only one of two reasons that the media aren’t acknowledging the country’s crime crisis, the nation’s largest and oldest police union says.

“Those saying that America's #CrimeCrisis is not out of control are either not paying attention or trying to cover for the rogue prosecutors pushing radical policies,” the National Fraternal Order of Police (FOB) tweeted on Monday. 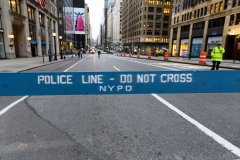 “To the various media folks who’ve been turning a blind eye to the killings in our streets: do your damn job!” the FOP post demands.

Don’t listen to “talking heads” in the media who try to deny that crime is out of control, the FOB said in a separate post:

“Despite what you may hear from some talking heads, America's #CrimeCrisis is out of control… thanks to Rogue Prosecutors, Activist Judges and #BailReform”

“America is beginning to see that rogue prosecutors across the US, many of whom were elected thanks to Soros & anti-police groups, are letting repeat, violent criminals out of jail to prey on innocent, law-abiding citizens Time to hold CRIMINALS + ROGUE PROSECUTORS accountable!”