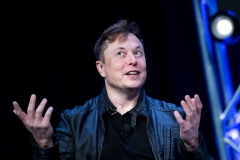 After Sen. Elizabeth Warren (D-Mass.) accused Tesla and SpaceX CEO Elon Musk of “freeloading,” the billionaire who publicly opposes Democrats’ $1.75 trillion “Build Back Better” plan, fired back with a series of barbs and rebuttals.

The Twitter war began on Monday, when Warren took a shot at Musk being named Time’s “Person of the Year” and called for tax code changes targeting Musk:

“Let’s change the rigged tax code so The Person of the Year will actually pay taxes and stop freeloading off everyone else.”

“Stop projecting!” Musk replied to Warren Tuesday, linking to a Fox News commentary calling her a “fraud” for attempting to claim to be an American Indian.

His next tweet likened Warren to an angry woman who yells at everyone for no reason and applying the pejorative moniker “Karen” to the senator. He, then, followed up with tweets claiming he will pay a higher tax than “any American in history” in 2021 - and condemning her wanton spending policies that have already spent it:

Analysis by Bloomberg finds that, while he might not pay record taxes in 2021, he does stand to be on the hook to pay more than ten billion dollars:

“Musk’s tax bill for 2021 could exceed $10 billion if he exercises all his [stock] options due to expire next year, according to Bloomberg calculations. While it’s hard to say whether that would be a record, it’s certainly one of the biggest payments.”

Musk spoke out against “Build Back Better” last week at a conference of CEOs, The Independent reports:

“He would scrap the bill altogether, Musk told a conference of CEOs on Monday.

“I would say can this bill, don’t pass it. That’s my recommendation,” he told an audience at The Wall Street Journal’s annual CEO Council on Monday.”

“The colourful CEO said he took issue with how the $2 trillion spending package would add to the “insane” federal budget deficit, and would have the government incentivising certain business, including with up to $12,500 in incentives for electric car buyers.”