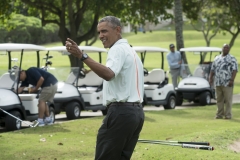 Last Friday, Michelle Obama debuted two PSA videos urging African-Americans to stay safe from the coronavirus by staying home – and the very next day her husband Barack was spotted out on the links playing golf.

As the Chicago Sun-Times reported in its article titled “Michelle Obama urges African Americans to stay home to prevent the spread of COVID-19,” two PSAs by Mrs. Obama were released on Friday, April 24, telling African-Americans to stay home, even if they’re not exhibiting any symptoms of the virus, because they can still spread the disease to others.

Then, on Saturday, her husband, former President Barack Obama, was outside enjoying a round of golf in Virginia, Politico Playbook reported on Sunday, April 26:

As PJ Media reported Thursday in its story juxtaposing Mrs. Obama’s words with her husband’s deeds, the golf course is an exclusive, member-owned venue that “is at least a 45-minute drive from the Obamas’ home in the Kalorama neighborhood of Washington, D.C.”