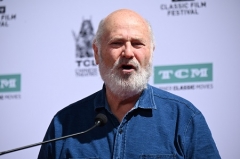 Producer and left-wing activist Rob Reiner, who starred as a character nicknamed “Meathead” in the iconic sitcom “All in the Family,” suggested President Donald Trump should take Russian Pres. Vladimir Putin’s new COVID-19 vaccine – and then go to work in a meat-packing plant.

After Putin announced the vaccine on Tuesday, Reiner tweeted that Trump should “honor” his “BFF” (Best Friend Forever) by taking the first dose of the vaccine:

“Trump’s BFF announces a Covid vaccine. Trump should honor him by taking the first dose then start working at a meat packing plant.”

However, the first doses have already been taken – one of them by Putin’s daughter – FoxNews.com reports:

“Russia on Tuesday claimed to be the first country in the world to register a coronavirus vaccine, with President Vladimir Putin announcing it is safe for use and that one of his daughters has already been inoculated.”

“Speaking at a government meeting Tuesday, Putin said the vaccine has undergone proper testing and is safe. He emphasized that vaccination will be voluntary.”