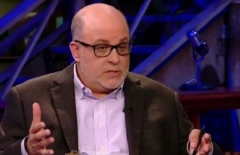 In an appearance on “Unfiltered with Dan Bongino, Levin laid out the similarities between the philosophies of Trotsky and the Democrat Party, both of which rely on unending emergencies and anarchy:

“Do they support our sovereignty, so we have defined borders? No.

“Do they support the definition of citizenship? No.

“Do they support the idea of free market capitalism, which has created wealth for more people than any other system on the face of the earth? No.

“Is there anything that they believe in that this nation was founded in? No.

“Critical race theory. The transgender movement – it’s a whole movement. Climate change, which is a de-growth movement founded in Europe in the 1970s. And the war, again, on capitalism.”

“This reminds me of Trotskyism: that is, this constant state of turmoil. Emergencies. Anarchies. This is not necessary,” Levin said, adding that Democrat policies are responsible for the nation’s pressing problems, like the border crisis, high gas prices and inflation:

“You can secure the border. It's not that hard. Trump was doing it. You don't have to spend us into oblivion, like they’re doing, and then lie about it. Drive up the price of fuel. It’s simple: they shut down the oil wells. That's why the price of fuel is so high. And the impact on inflation is obvious.