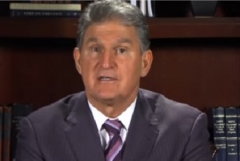 Sen. Joe Manchin (D-W.V.), a key vote in the 50-50 Senate, says he won’t support his party’s H.R. 1 bill – but, he would back a scaled-back version of Democrats’ efforts to overhaul and federalize elections.

Manchin prefers the John Lewis Voting Rights Act to the Democrats’ “For The People” (H.R. 1) bill. But, even then, Manchin has “vowed that he would not bring the he bill to the floor for consideration unless it has bipartisan backing,” ABC News reports.

Passing a bill that would impose federal voting standards on all 50 states is “something that can be done; it should be done,” Manchin told ABC News Correspondent Rachael Scott on Tuesday.

But, the bill must have support from both parties, if it’s to restore Americans’ confidence in the nation’s elections, Manchin told Scott.

Sen. Manchin also said he’s opposed to taking any shortcuts advocated by his Democrat colleagues, such as eliminating the filibuster rule. By abolishing the filibuster, Democrats would not need 60 votes in the 50 Republican, 50 Democrat Senate in order to pass the measure.

By eradicating the filibuster, "You basically destroy the Senate as we know it," Sen. Manchin told ABC’s Scott.