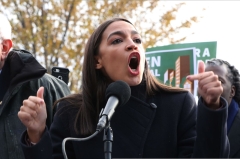 Using a deadly mass shooting at a Texas elementary school on Tuesday, Rep. Ocasio-Cortez tweeted an attack on pro-life Americans who support the Second Amendment.

“It is an idolatry of violence” to support the Second Amendment, while believing in the sanctity of the life of preborn children, Ocasio-Cortez tweeted:

“There is no such thing as being ‘pro-life’ while supporting laws that let children be shot in their schools, elders in grocery stores, worshippers in their houses of faith, survivors by abusers, or anyone in a crowded place. It is an idolatry of violence. And it must end.”

“Using a mass shooting of innocent school children to advance the slaughter of innocent preborn children is grotesque,” said in a follow-up tweet on Wednesday.