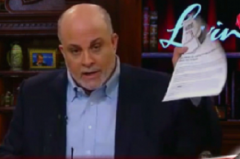 “This endless war against Donald Trump is really repulsive,” Levin said in an appearance on Fox News Channel’s “Hannity.” Democrats’ attempts to impeach a president after he leaves office is a sign of “the idiocy and insanity” taking place in Congress these days, Levin said:

“What we saw today is why the American people hate politics, hate Washington, and hate Congress. We also saw something else today: for the second time, there’s been an unconstitutional impeachment of an innocent man, Donald Trump.

“This endless war against Donald Trump is really repulsive.

“And, no, you cannot hold a trial against a private citizen or pursue a former president who is now a private citizen under the Impeachment Clause. That was never intended. So, that is just absurd – but, that’s the idiocy and the insanity that’s now taking place on Capitol Hill.”

Historians are going to look at the Democrats’ impeachment report and ask, “What kind of a moron wrote a document like this?” Levin said. “There’s not one sliver of evidence” in it, Levin said, calling the report nothing more than “an Op-Ed”:

“High crimes and misdemeanors? This is their report, ladies and gentlemen. It’s 76 pages, 26 pages of which are an appendix, to news articles, to essays, to speeches by former colleagues. There’s not one sliver of evidence of inciting an insurrection of any kind in this document: 50 pages, basically, an Op-Ed.

“Historians are going to look at this and say, ‘What kind of a moron wrote a document like this?’ Has anybody read it? No.”

“There’s different types of tyranny,” and one of them is “the tyranny of the legislature,” Levin said. “The American people saw two tyrannies this week. One today, in the House of Representatives, and one last week, outside the Capitol Building.”