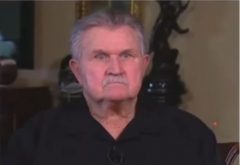 “They wouldn’t have played for us. It’s that simple,” Mike Ditka said when asked what he would’ve done if players had knelt during the National Anthem back when he was coaching the NFL’s Chicago Bears.

“I would bench them” until they learn to respect the flag, Ditka told Fox News Host Jesse Watters in an interview over the weekend.

“This country has given them the opportunity to become millionaires,” so players should “Enjoy it, respect it, but don’t act like a clown,” Ditka said.

Ditka, in a recent interview with TMZ, declared kneeling for the Anthem is the wrong way to protest and that “If you can't respect our national anthem, get the hell out of the country.”