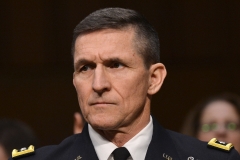 On Thursday, the Justice Department announced it is dropping the case against former National Security Adviser Gen. Michael Flynn and has filed a motion to dismiss.

In 2017, Flynn pleaded guilty to lying to the FBI. He was accused of lying about his contacts with then-Russian ambassador Sergey Kislyak. While the federal judge overseeing the case would still have to grant the motion, Thursday’s motion to dismiss comes on the heels of newly-released memos “raising serious questions” about the investigation into Flynn, Fox News reports:

“The Justice Department on Thursday moved to drop its case against former National Security Adviser Michael Flynn, in a stunning development that comes after internal memos were released raising serious questions about the nature of the investigation that led to Flynn’s late 2017 guilty plea of lying to the FBI.

“DOJ officials said they concluded that Flynn's interview by the FBI was ‘untethered to, and unjustified by, the FBI's counterintelligence investigation into Mr. Flynn’ and that the interview was ‘conducted without any legitimate investigative basis.’”

Neither the alleged false statements nor the materiality of those statements can be proved “beyond a reasonable doubt,” the motion states, adding that “The Government is not persuaded that the January 24, 2017 interview was conducted with a legitimate investigative basis.”

What’s more, prosecutors have an obligation to seek exoneration, admit errors, and “do justice,” the Justice Department writes. The motion also warns of the “immense power to strike at citizens” of federal prosecutors who should be seeking truth, not victims:

“The advocacy function of a prosecutor includes seeking exoneration and confessing

2009). So in the final analysis, irrespective of Mr. Flynn’s plea, “prosecutors have a duty to do

(1980) (“Prosecutors are also public officials; they too must serve the public interest.”) (citation

omitted). Federal prosecutors possess “immense power to strike at citizens, not with mere

individual strength, but with all the force of government itself.” Robert H. Jackson, The Federal

United States Attorneys, April 1, 1940). For that reason, “the citizen’s safety lies in the

prosecutor who … seeks truth and not victims, who serves the law and not factional purposes,

and who approaches [the] task with humility.” Id. Based on a careful assessment of the balance of proof, the equities, and the federal interest served by continued prosecution of false statements

that were not “material” to any bona fide investigation, the Government has concluded that the

evidence is insufficient to prove its case beyond a reasonable doubt. The Government therefore

moves to dismiss the criminal information under Rule 48(a).