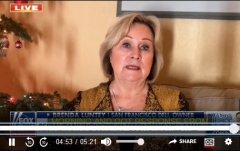 “I don’t want a stimulus, I want to keep my business open,” Luntey said Tuesday in an interview on Fox News Channel. She said customers can choose to dine in, but she’s also giving them other options and, if they are especially vulnerable to the coronavirus, they should stay home:

“I don’t want stimulus, I want to keep my business open. And, I want to respect the mandates to keep people safe.

“I have a choice: I have take-out, dine-in, delivery, and curbside. So, they have an option to pretty much do whatever they want.”

Luntey also spoke out agains the hypocrisy of politicians’ mixed messages and “Do as I say, don’t do as I do” attitude at a time when so many U.S. businesses are being forced to close:

“We got mixed messages, not only from the scientists and the doctors, but from our legislators and our governors and our mayors and even our city officials.

“So, we opted to stay open [despite] a second shutdown and we had overwhelming support as things have progressed in our area. A lot more businesses have chosen to do the same thing. And, it’s not a matter of bucking the system, you might say – it’s a matter of survival.”