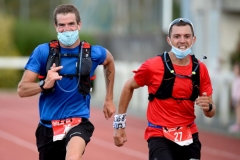 A public school track and field coach in New Hampshire has been fired after he refused to make his players where coronavirus masks while running in competition.

“I will not put kids on the track and tell them to run any races while wearing masks,” the coach told his school’s athletic director, in defiance of New Hampshire Interscholastic Athletic Association guidelines, CBS affiliate WBZ reports:

“Pembroke Academy track and field coach Bradley Keyes said the school informed him that athletes would be required to wear masks during all races and the majority of field events during the upcoming spring season.”

“In a blog post on Saturday, Keyes urged people to reach out to the school to let them know they disagree with the policy. Keyes also shared an email that he sent to Pembroke athletics director Fred Vezina that began ‘I’ll come straight to the point. I will not put kids on the track and tell them to run any races while wearing masks.’”

“These insane policies are robbing kids of once-in-a-lifetime opportunities,” Keyes said in the email, according to a transcript published by The Daily Wire:

“I will not stand up in front of the kids and lie to them and tell them that these masks are doing anything worthwhile out in an open field with wind blowing and the sun shining,” Keyes said in his letter. These insane policies are robbing kids of once-in-a-lifetime opportunities for no valid reason other than irrational fears and going along with the sheep.”

“Fire me if you must,” Keyes wrote.

And, that’s just what the school did, Keyes reported in a new follow-up post on Monday:

“I have been fired. I am not surprised. I made my choice to speak out. They made theirs.”

“I just think people haven’t pushed back. And, I decided it was time to push back,” Keyes told WBZ in an interview following his dismissal, in which he described the effect masks have on runners:

“Masks restrict breathing, there’s no question about it – especially, think about running full speed: the wind is in your face, it’s shoving your mask back into your nose and your mouth.”

In his blog posts, Keyes said requiring athletes to wear masks is “senseless, irrational, cowardice bulls**t” that will prompt some athletes to violate the rules in order to gain a competitive advantage.

“I won’t be a part of that,” the former coach says.