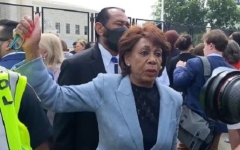 “The hell with the Supreme Court; we will defy them!” Rep. Maxine Waters (D-Calif.) vowed Friday, after the U.S. Supreme Court ruled that the 14th Amendment does not confer a right to abortion and that the landmark Roe v. Wade decision is overturned.

Amidst a crowd of protesters outside the Supreme Court building, a defiant Waters yelled to reporters that they “ain’t seen nothing, yet” - especially from the “millions” of Black women who will rise up to defy the court’s decision:

“You see this crowd out here? You ain’t seen nothing, yet.

“Women are going to control their bodies no matter how they try and stop us.

“The hell with the Supreme Court - we will defy them. Women will be in control of their bodies.”