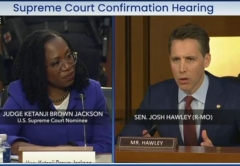 Sen. Hawley summarized the findings of the seven cases regarding child pornography charges presided over by Jackson during her district court tenure, in which she had discretion in her sentencing.

6.       Defendant distributed over a hundred videos of child pornography:

7.       Defendant was convicted of traveling across state lines to engage in sexual intercourse with a child and also possessed six separate thumb drives of child pornography:

Sen. Hawley said that he was troubled by the sentences doled out by Judge Jackson in these cases, and that he hoped to discuss them with her as the hearings continued.