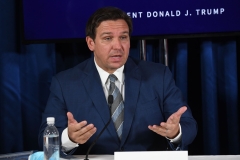 Gas prices, and prices on all goods, are skyrocketing, but the Biden Administration has no intention of taking the steps necessary to curb inflation, Gov. Ron DeSantis (R-Fla.) said Tuesday.

In a speech to the Florida American Legion Boys State Program, Gov. DeSantis said that, after first dismissing inflation, then claiming it was temporary, and then blaming it on Russia’s president, the Biden Administration finally it admitted that “We don’t know what the hell we’re doing,” DeSantis said.

DeSantis said that there are two main “unforced errors” that are driving today’s runaway inflation: the Biden Administration’s war on domestic energy production and insistence on printing and borrowing money the country doesn’t have:

“You can’t run an economy on wind mills and solar – you need oil and gas. And, they declared war on that. They made it much more difficult to produce and refine. And so, that signal was sent, and that’s been really negative.

“They also came in and printed and borrowed trillions and trillions of dollars that we didn’t have and that was not necessary to do. And so, when you expand the money supply like that, of course you’re going to end up getting inflation. And so, now people are paying five bucks a gallon for gasoline.”

Pres. Biden has it in this power to take a step to curb inflation, but there’s no chance he’ll do it, Gov. DeSantis said:

“Why do you want to go beg some of these dictatorships for energy? You want to be able to control your own destiny. And so, if they could reverse course on that and really go all-in into to domestic energy production, that would be a very powerful signal.”

“The chance of them doing that is, basically, zero, though,” DeSantis said.

“I don’t think that is going to happen. And so, the result is, this going to be something that is likely to persist for quite some time,” DeSantis predicted.