Gov. Abbott: ‘Texans Have the Backbone and the Will to Secure Our Border – Two Things that Joe Biden Does Not Have’ 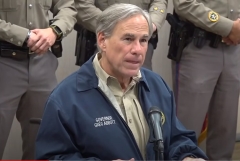 “The first location will be the steps of the United States Capitol,” Texas Governor Greg Abbott (R) declared Wednesday, announcing that his state is going to begin busing illegal aliens to the Nation’s Capital.

“Texans have the backbone and the will to secure our border – two things that Joe Biden does not have,” Gov. Abbott said, detailing news steps to deal with the illegal aliens that the Biden Administration is dropping off in Texas.

“We are sending them to the United States Capital, where the Biden Administration will be able to more immediately address the needs of the people that they are allowing to come across our border,” Gov. Abbott said.

“The Biden Administration’s open-border policies have led to a record number of illegal immigrants crossing the border into the United States,” Gov. Abbott said.

In particular, Abbott warned of President Joe Biden’s decision to end Title 42 -- which has forced the return of tens of thousands of would-be asylum-seekers from the U.S.

More than half a million illegal aliens will enter the U.S. monthly once Title 42 ends, so Texas is taking unprecedented security measures, Abbott said:

“With the Biden Administration ending Title 42 expulsions in May, Texas will be taking its own unprecedented actions this month – to do what no state in America has ever done in the history of this country to better secure our state, as well as our nation.

“A zero-tolerance policy for unsafe vehicles for smuggling migrants across the border is being implemented immediately.”

“Deploying boat blockades at appropriate regions in the Rio Grande River” and “Deploying razor-wire at low-water crossings and high-traffic areas.”

“The border region is going to be lit during night in prominent smuggling areas to make it far easier to detect any activity that is taking place.”