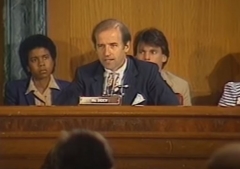 On Friday, President Joe Biden announced creation of a commission to explore expanding the Supreme Court (“Court Packing”), which would allow him to appoint additional justices and shift the balance of the Court – but, he didn’t always think this was a good idea.

When Republican Ronald Reagan was president in 1983, then-Senator Joe Biden (D-Delaware) declared the concept of court-packing a “bonehead idea” and a “terrible, terrible mistake.”

“Biden, then a U.S. Senator from Delaware, made the comments during a Senate Judiciary Committee hearing in July 1983 regarding nominations to the U.S. Commission on Civil Rights. At the time, Republican President Ronald Reagan had stoked controversy for attempting to replace three members of the commission.

“Biden argued at the time that, although it was within the president’s right to do so, it risked damaging the credibility of the commission. He compared it to President Franklin D. Roosevelt’s unsuccessful attempts in 1937 to expand the Supreme Court by six justices – in other words, pack the court.”

It wasn’t just a “bonehead idea,” Sen. Biden argued, “It was a terrible, terrible mistake” because it would threatened the independence of “the most significant body in the country”:

“President Roosevelt clearly had the right to send to the United States Senate, the United States Congress, a proposal to pack the Court. It was totally within his right to do that: he violated no law, he was legalistically, absolutely correct – but, it was a bonehead idea.

“It was a terrible, terrible mistake to make.

“The president had the right to do that. He was totally within his power – and his objective was seen clearly.”