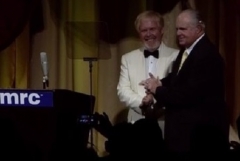 Those who knew Limbaugh personally, apart from his on-air persona, knew he was a man of great humility who always responded to praise by returning it, Bozell said:

“To know Rush is to not be surprised that, when he accepted my invitation to join us tonight, he insisted that he receive no special recognition on the program. We’ve honored that request, but really, it’s an impossible condition.”

“I can’t tell you how many times over the years, I’ve sent him a note to congratulate him on this or that, only to have him deflect the note with praise elsewhere.

“I could be wrong, but I believe he’s never received a word of praise without responding with astonishing humility. I’ve known Rush for many, many years. In fact, both of our enterprises are celebrating our thirtieth anniversaries. Rush has been at our side from the very start, giving oxygen to our work to millions of our followers on a regular basis.”

The MRC and, indeed, the entire conservative community owe Limbaugh a great debt of gratitude for his contributions to the movement, Bozell said as he welcomed Limbaugh on-stage to address the Gala:

“Without this man, we wouldn’t be here tonight. Not this organization, perhaps not any organization represented here. What higher compliment can I give than to say that this man does deserve his own category as the leader of the conservative movement?

“I shudder to think of a world without him. I jump for joy knowing we’re celebrating our thirtieth anniversary with him – because that’s as it should be. Ladies and gentlemen: Rush Limbaugh.”