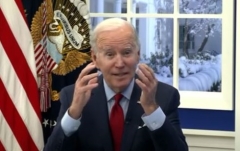 After President Joe Biden delivered a speech Thursday outlining his plan to reduce gas prices, energy groups called the plan short-sighted and said Biden’s speech was a desperate attempt to shift blame away from the administration.

“There are many factors behind rising energy costs, from geopolitical volatility and supply chain constraints to policy uncertainty, and the American people deserve real solutions.

“The SPR was put in place to reduce the impact of significant supply chain disruptions, and while today’s release may provide some short-term relief, it is far from a long-term solution to the economic pain Americans are feeling at the pump.”

“The best thing the White House can do right now is to remove barriers to investment in American energy production and infrastructure,” Sommers said. “Unfortunately, today we heard more mixed signals about developing affordable, reliable and secure American natural gas and oil.”

In a statement to CNSNews.com, Western Energy Alliance (WEA) President Kathleen Sgamma said that Biden’s speech is evidence that the administration is panicking because Americans realize the president’s policies are to blame for skyrocketing gas prices:

“The White House is in a panic because polling suggests Americans understand that the anti-oil-and-gas agenda of this administration is the primary reason gasoline prices are high. The president is trying to pass blame onto producers. On the plus side, we’re glad the president now wants us to develop on federal lands, since he had spent the past two years promising to eliminate federal oil.”

Sgamma also slammed Biden’s plan to penalize oil companies for not utilizing leases – even though it's government red tape and climate change studies, in addition to lengthy legal challenges, that are preventing them from doing so:

“The federal onshore oil and natural gas system is a complex one fraught with government red tape and obstacles. The inefficiencies of operating on federal lands, which account for about 10% of U.S. production, mean that companies must request permits years in advance of when they may need them. Federal permits are often held up by bureaucratic delays or legal challenges.

“The Interior Department just announced it’s holding up permits on 3,800 leases while it conducts additional climate change analysis. There are 4,600 permits awaiting approval.

“Western Energy Alliance has been in court for years defending 5,900 leases of 7.3 million acres and companies can’t develop on most of them when they’re caught up in legal challenges. But the president now wants to penalize us for these delays?”