Elon Musk: ‘The Real President Is Whoever Controls the Teleprompter’ 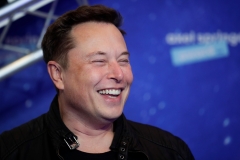 “The real president is whoever controls the teleprompter,” billionaire and Tesla CEO Elon Musk said in an interview published Monday.

Musk made the observation in an interview with the “All In” podcast, joking with the show’s hosts about President Joe Biden’s apparent need to take more naps due to his lack of cogency when speaking publicly.

“It’s hard to tell what Biden’s doing, to be totally frank,” Musk said.

Musk made the comment while claiming that the Biden Administration needs to further open America’s borders in order to allow “top talent” and hard-workers to come to the U.S.

“This administration doesn’t seem to get a lot done,” Musk said, giving credit to the Trump Administration for its effectiveness:

“The Trump Administration, leaving Trump aside, there were a lot of people in the administration who were effective at getting things done.”

“This administration seems just to not have, like, the drive to sh*t done,” Musk concluded.