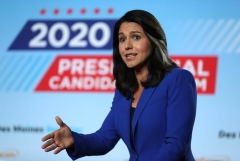 “Our Department of Justice is being weaponized as a political hit squad,” Former Democrat congresswoman (Hawaii) Tulsi Gabbard said Monday, commenting on how Democrats held in contempt of Congress have not been indicted, but former Trump White House official Steve Bannon has.

In a Fox News Channel interview, Gabbard was asked to comment on the double standard after Host Greta Van Greta Van Susteren listed some of the Democrats who’ve been let off the hook after being held in contempt of Congress.

“This is just the latest example of how our Department of Justice is being weaponized as a political hit squad to go after the political opponents of the Powers-That-Be that are in charge,” Gabbard said, emphasizing the importance of public trust in the country’s legal system:

“You know, in our democracy, We-The-People need to be able to trust in the rule of law. We need to be able to trust that institutions like the Department of Justice and our law enforcement entities are truly acting in the public interest and that we will all be treated fairly and equally under the law, regardless of any other factors, regardless of our political viewpoints, of who we voted for who were speaking out for or against.”

The current Justice Department’s actions are sending out “the clear message of fear” to anyone who dares to criticize the Biden Administration, Gabbard said:

“The really dangerous thing that we're seeing, as a consequence of what's playing out here in this double standard that you've pointed out, is the clear message of fear: that, if you speak out against us, if you're an opponent of the Powers-That-Be, then the Department of Justice can go after you and charge you and prosecute you.

“However, if you are on the other team, if you are in agreement with, or liked by, those in power, then we're going to treat you kindly, or you'll get off the hook, and you won't be treated in the same way that your political opponents will be.”

“This is the telltale sign of an authoritarian regime and directly undermines our democracy. That is really what's at the core of what's wrong here,” Gabbard warned.

“It's mind-blowing to see this double standard at play,” Gabbard said. “And, again, the more serious issue is how directly this threatens and undermines our democracy and the faith that we need to have in these public institutions and public officials.”

The one-sided January 6th Committee investigation is further proof of how Congress is more concerned with power than with serving the American people, Gabbard said:

“You see how lopsided or one-sided this whole January 6th committee is first of all - to present information without having any opposing views or even discerning questions being asked of a lot of these people who are testifying.

“There's no surprise here to see how one-sided the outcome is becoming, and the response that people are having.

“That's one example of many, unfortunately, where Congress is more driven by who can be in power and stay in power and go after political opponents than they are actually concerned about presenting the truth, passing legislation that serves the best interests of the people in the country.”