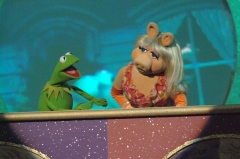 On Friday, Disney+ began offering subscribers five seasons of “The Muppets” – with a warning.

Before an episode can be viewed, subscribers are subjected to an “offensive content” warning, The New York Post explains:

“The disclaimer shown prior to each episode warns viewers that the show features ‘stereotypes’ and ‘mistreatment of people or cultures.’

“‘This program includes negative depictions and/or mistreatment of people or cultures. These stereotypes were wrong then and are wrong now,’ the disclaimer states.”

While Disney has not specified why the Muppets are offensive, “some characters depict Native American, Middle Eastern and Asian people” and “legendary country singer Johnny Cash is seen performing in front of a Confederate flag,” The Post reports. A featured character of the show is a heavy-set puppet named Miss Piggy.