DeSantis: The D.C. Protesters Trying to Shut Down the Supreme Court are Insurrectionists 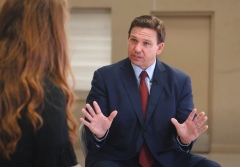 The pro-abortion protesters trying to shut down the Supreme Court on Monday by blockading the streets around it will be allowed to get away with a lot more than they would if they were conservative protesters, Governor Ron DeSantis (R-Florida) says.

Preventing a court from functioning constitutes an insurrection, Gov. DeSantis said in an interview with Fox & Friends, as the mob was gathering on the streets of D.C.

However, there’s a lot less interest in protecting the Supreme Court than there would have been “if the shoe were on the other foot,” DeSantis said:

"I think that we have a rule of law in this country and you don’t just get to have a mob descend on a Supreme Court Justice’s house or try to impede the operations of government because there may be a decision you don’t like.

“That would be considered an insurrection to stop a court from functioning, and yet they seem to be able to get away with a lot more than if the shoe were on the other foot. So, I think it's been really problematic to watch the behavior there.”

Media are ignoring last week’s arrest of a man on his way to kill Justice Brett Kavanaugh who, reportedly, may be inclined to vote to overturn the court’s Roe v. Wade, which created a national right to abortion.

What’s more, House Speaker Nancy Pelosi (D-Calif.) is dismissing the threat to Kavanaugh and holding up a bill to provide additional security to the Supreme Court.

Allowing protesters to try to change a Supreme Court’s decision goes against America’s commitment to the rule of law, DeSantis said:

“Well, you have someone travel from half way around the country to come and murder Justice Kavanaugh. And that was like not even significant news in a lot of the mainstream media. And not only was it significant because it's an attack on somebody's life. They're trying to change the outcome of decisions that they are concerned that they don't like. And that is just totally antithetical to a rule of law.”