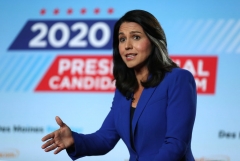 Gabbard, a veteran and former Hawaii Democrat congresswoman, did not run for election in 2020. She is currently serving as a lieutenant colonel in the U.S. Army Reserve.

In a Wednesday Twitter post, Gabbard described Youngkin’s defeat of Virginia’s incumbent Democrat Gov. Terry McAuliffe as a win for all Americans:

‘McAuliffe’s loss is a victory for all Americans. Why? Because it was a resounding rejection of efforts to divide us by race, the stripping of parental rights, and arrogant, deaf leaders. This benefits us all.’

As a moderate Democrat, Gabbard has repeatedly bucked the party line on issues, such as Democrats’ open-door border policy, support of transgender biological males competing against biological females, opposition to protections for children who survive attempted abortions, and their attacks on U.S. border agents.