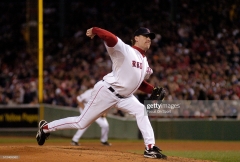 Former three-time World Series winning pitcher Curt Schilling is asking that he be removed from contention in next year’s vote for Major League Baseball’s (MLB) Hall of Fame, voted on by “morally bankrupt” sports writers.

Schilling, who won 216 games and had an 11-2 record in the playoffs in his major league career, made the announcement on social media on Tuesday via a pair of tweets linking to a Facebook post of his request in a letter to the Hall of Fame:

“Former players will be the ultimate judge, as it should be. I won’t allow a group of morally bankrupt frauds another year to lie about my life.”

Schilling was the leading vote-recipient, but fell short, in the Hall of Fame’s 2021 selection process, voted on by members of the Baseball Writers Association of America (BBWA), the Hall reported Tuesday:

“Players are elected to the Hall provided they are named on at least 75 percent of ballots cast by eligible members of the BBWAA. With 401 ballots submitted in the 2021 election, including a record total of 14 blanks, candidates needed 301 votes to be elected.

“Falling 16 votes short was pitcher Curt Schilling, whose total of 285 in his ninth and next-to-last year of eligibility represented 71.1 percent of the electorate.”

Schilling has been the subject of hostile press for his conservative views and public comments, such as his opposition to transgender bathroom policies, comparison of Muslim extremists to Nazi-era Germans, and characterization of liberals who refused to denounce last year’s violent riots in major U.S. cities.

In his letter, Schilling says he was always respectful to others, regardless of their race, sexual preferences and misdeeds, during his time as a player – and that none of the media accusations to the contrary are true:

“Nothing, zero, none of the claims being made by any of the writers hold merit. In my 22 years playing professional baseball in the most culturally diverse locker rooms in sports I’ve never said or acted in any capacity other than being a good teammate.

“I’ve certainly been exposed to racism and sexism and homophobia as it’s part of who human beings are. I’ve played with and talked with gay teammates. I’ve played with wife beaters, adulterers, assaulted, drug addicts and alcoholics. I’ve never hit a woman.”

“The media has created a Curt Schilling that does not and has never existed,” he writes.

The former MLB star says he does not think he’s worthy of the Hall of Fame, but he would graciously accept the honor if he is voted into it by the Veterans’ Committee, comprised of ex-players, not writers:

“I will not participate in the final year of voting. I am requesting to be removed from the ballot. I’ll defer to the veterans committee and men whose opinions actually matter and who are in a position to actually judge a player. I don’t think I’m a hall of famer as I’ve often stated but if former players think I am then I’ll accept that with honor.”