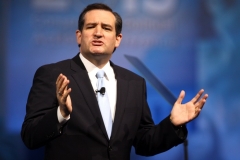 “Socialism doesn't work: It has produced misery, suffering, poverty, and death wherever it's been applied” – but, that won’t stop the Woke children running the Biden Administration from pushing it, even if it costs them both houses of Congress, Sen. Ted Cruz (R-Texas) says.

Faced with the prospect of devastating election losses, any rational president would modify his policies, Sen. Cruz said in an interview on Fox Business Channel on May 19:

“Any ordinary office-holder, any adult, any president in that position would say, ‘Hey, let’s change course. Maybe, we can do something not to lose both houses of Congress. And, what astonished me was the State of the Union. Joe Biden didn’t even try. They made no attempt to move to the middle.”

“And, the fact that Biden won’t even try that, what that tells me, is that he no longer has the mental acuity to be aware of what’s going on,” Cruz said.

Instead, the Biden Administration is being run by Woke, socialist staffers, who are on a suicide mission, Cruz said: