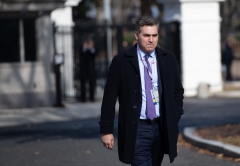 “Fox News had Trump on but didn't ask him about the insurrection he caused,” Acosta tweeted. On Saturday, the Senate acquitted the former president on the charge of inciting an insurrection.

“Trump repeating his election lies as he pays tribute to Limbaugh on Fox: ‘You don't know how angry this country is... We should have had it,’” Acosta wrote in an earlier post.

In his interview, Trump was asked what Limbaugh told him after last November’s presidential election and if he had told Trump what he’d like to see him do after Joe Biden won.

Fox News: “What did Rush Limbaugh tell you after the election of November 3rd? What were those conversations like?”

Fox News: “Did he say to you what role he would like to see you play next?”

Donald Trump: “We didn't talk too much about that. I didn't want to talk about that too much, either, because I was disappointed by voter tabulation. It think it's disgraceful what happened. We were like a third-world country on election night with the closing down of the centers and all of the things that happened late in the evening. And, he was furious at it. And, many people are furious.