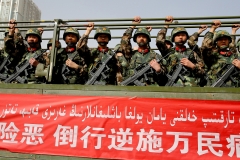 On Wednesday, Communist China warned the United States of the destructive effects of using sports to play politics.

President Joe Biden has been in talks with countries regarding the U.S. participation in the 2022 Winter Olympics being hosted by China, in light of the Communist regime’s human rights abuses.

Politicizing sports damages the both the spirit of sports and the best interests of their athletes, China said in a statement Wednesday, the Associated Press reports:

“A Foreign Ministry spokesperson rejected accusations of abuses against ethnic minorities in the Xinjiang region. He warned of an unspecified ‘robust Chinese response’ to a potential Olympics boycott.

“‘The politicization of sports will damage the spirit of the Olympic Charter and the interests of athletes from all countries’ said the spokesperson, Zhao Lijian. ‘The international community including the U.S. Olympic Committee will not accept it.’”

Yet, while Pres. Biden supports Major League Baseball politicizing sports by moving its All-Star Game out of Georgia in protest of the state’s new voter integrity law, he is not considering a boycott of the Olympics over China's human rights abuses.

“We have not discussed, and are not discussing, any joint boycott with our allies,” White House Press Secretary Jen Psaki said Wednesday.